Called Time and Tide, it plays with the sound of the ticking clock in the church tower. It was the first thing I heard when I visited St Nicholas. I wanted to see how the live ticking would interact with a recording.

It worked better than I imagined, with the two sounds chasing each other over time, catching up and then seperating again. Sometimes it seems like they have found an extra tick!

The church is a little removed from the quay, but you only have to look at the inscriptions on some of the graves to see how the sea has played such a huge part not only in the working lives of the local community, but also in their spiritual one too.

I wanted to bring that sea into the church, so, as time ticks by we hear the sound of the water rushing over shingle – recorded just a little further up the coastline. 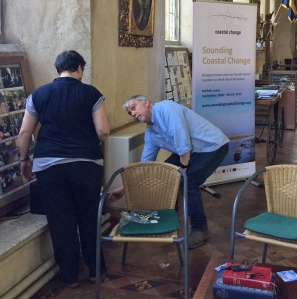 Here I am in the church explaining how to switch it on!

Some of the other elements of the church are also acknowledged and you can hear a short motif that gives a nod to the church organ and bell.

You can hear Tide and Tide at St Nicholas church all this week. The church is open daily.

There is also a free family event taking place on Friday evening.

To celebrate the launch of the Sounding Coastal Change project, this event will showcase:

•  The premiere of a music composition inspired by the Norfolk coast

My field recordings and other audio from Norfolk